COSYN was a state-of-art, bench-to-bedside programme focused on personalised therapeutics. COSYN integrated outstanding European academic and two large Pharma partners to exploit genomic findings for intellectual disability (ID), autism (ASD), and schizophrenia (SCZ). We capitalized on comorbidity, from clinic to cells and synapses to help understanding these disorders. Our ultimate intention was to facilitate development of individualized treatment to reduce the impacts of these conditions on people.

COSYN used our team’s access to large patient samples across the EU to find rare genetic variants of strong effect in patients with clinical comorbidity. These included cells from people with 22q11 deletion syndrome (22q11 DS), ID, and ASD. Since the start of the project, COSYN partners have analysed the clinical comorbidity profiles to select patients with the main psychiatric diagnosis (ID, ASD, SCZ), but also ID severity, psychosis, epilepsy, other psychiatric features (ADHD, major depression), other behavioural problems, dysmorphism, other medical diagnoses, and available functional data. In addition, the inheritance status and predicted impact of the rare variants were analysed. Finally, practical considerations were taken into account to select the most suitable cases for COSYN, in particular whether the right tools were available to study the neuronal impact of the genetic variant. Additional criteria included whether if the predicted effect was expected to be cell autonomous and the degree to which existing pharma compounds might engage with the gene product. Using these criteria, COSYN teams obtained cell samples from 10 patients with 22q11 DS, 9 patients with ID, and 10 patients with ASD. For SCZ, no partner had enough patients so we created laboratory models of cutting-edge findings for one important gene (TRIO). 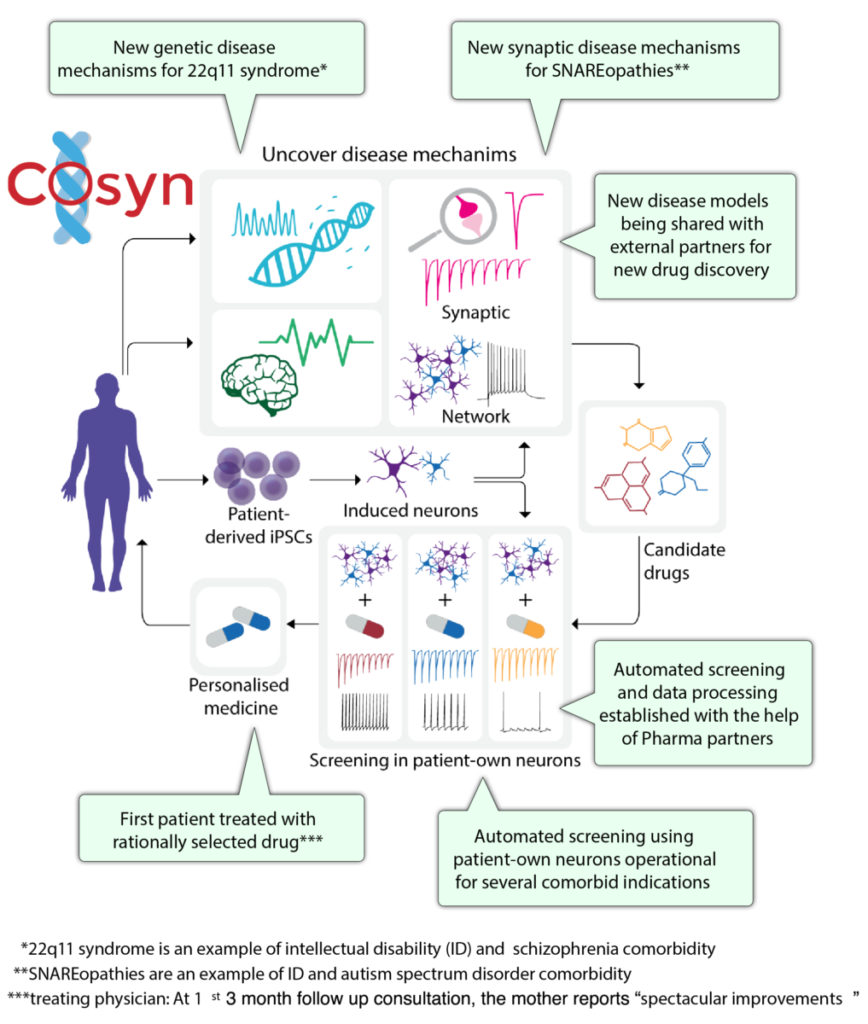 Using these samples as a starting point, we set out to uncover disease mechanisms of comorbidity as illustrated in the figure above. Hereto we generated novel neuronal cell models by using micro-lithography to generate micro-islands of support cells (glia cells) to allow single neurons to grow and form synapses onto themselves in culture (autapses) as illustrated in Figure below. We optimized and characterized these cultures in terms of in vitro maturation and synapse formation. 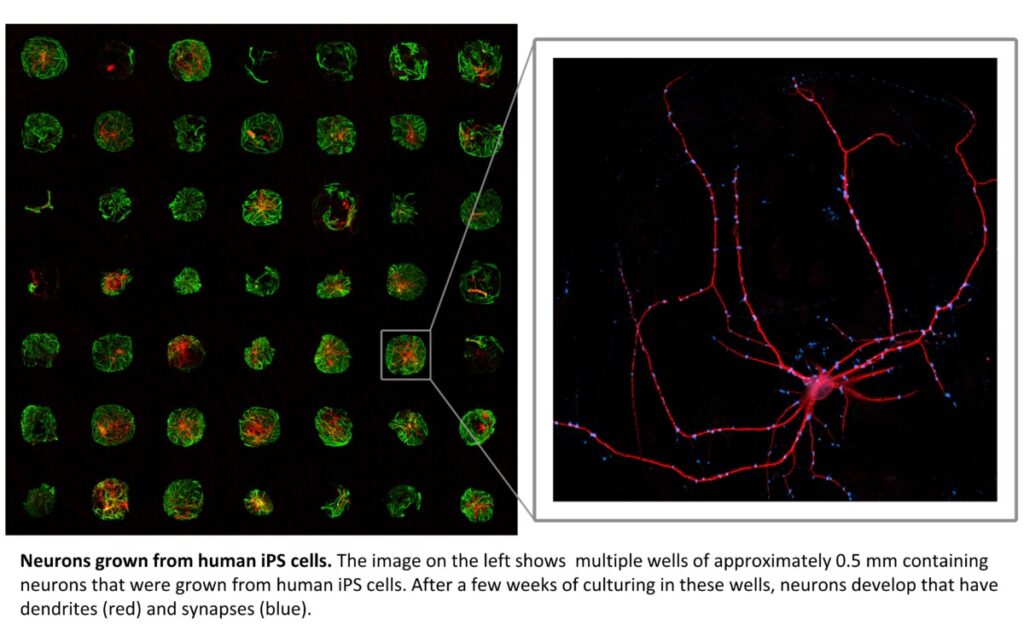 Many in vitro differentiation and maturation procedures had to be compared to find optimal in vitro models and be able to generate the novel neurobiological criteria that were required to elucidate mechanisms of comorbidity. We established a quality control pipeline with exome sequencing of all patient in vitro cell lines to identify any confounding genetic rearrangements that regularly emerge during re-programming of the primary (skin) cells and gene editing. To characterize the selected models in detail, we used patch clamp physiology to characterize synapse maturation and function in vitro and to standardize procedures of systematic analysis of synapses from the selected patients.
For the selected patient cell lines, multiple advanced neuroscience platforms were used to evaluate an extensive set of molecular and cellular parameters, and to identify alterations in synaptic biology in comparison with cell lines of control subjects (see figure below for an example). 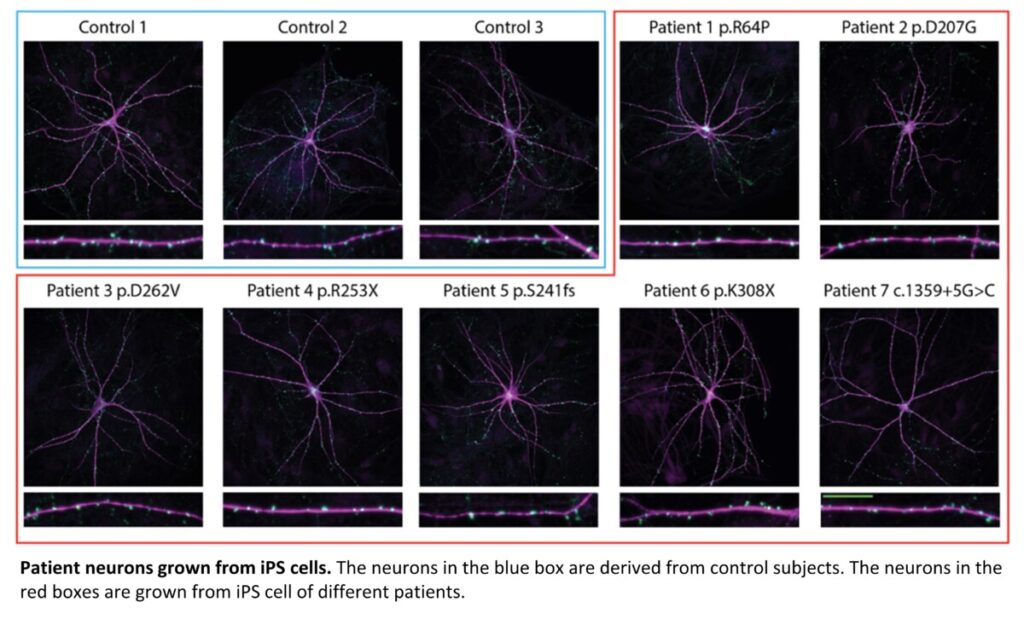 Furthermore, beyond the original plans of COSYN, we introduced modern genome editing (CRISPR/Cas9) to correct genetic variants in the patient cell lines or to recreate the same mutations in a standard laboratory cell line. These novel cellular models provide unique opportunities to European researchers to discover synaptic deficits associated with these rare genetic variants of strong effect and to build future cell models for compound screening and therapy design.
During the project, COSYN researchers have completed the analysis of the first genome editing projects (CRISPR/Cas9), in particular for STXBP1 and UNC13A. Mutations in these genes cause ‘SNAREopathies’, a complex mix of comorbid symptoms, prominently those related to ID and ASD. The extensive synaptic analyses provided new insights into the molecular functions of these genes and possible differences between human synapses and previously characterize rodent model synapses. These studies also form the basis for the analyses of engineered mutations in STXBP1, precisely mirroring the mutations detected in some of our patient samples. In this way COSYN was able to perform side-by-side comparisons between patient-own and engineered cell models.

During the final phase of the project, a selection of the cellular models were up-scaled to provide “industry-standard” cellular assays for compound screening. Reagents were shipped to one of our European Pharma partners Lundbeck . We refined diagnostic tools, used novel genomic and cellular features to improve disease classification and discriminate specific patient subtypes. Where possible we designed case studies, with our Pharma partners, in precision medicine: to identify patients with a genetic change whose consequences can be reproducibly ameliorated in vitro by an approved medication. Such case studies will be recommended to the patient and clinician as a double-blinded, N-of-one crossover case study to evaluate the clinical utility of a medication precisely indicated for that person. For a subgroup of patients, this may create medication that would tremendously improve their quality of life.
Crucially, during the final phase of the project we have rigorously studied whether there is a medication that might help people whose lives are severely impacted because of genetic accidents compromising the synaptic gene STXBP1. A first patient was treated with a rationally selected drug, and promising effects were reported (Figure 1). This was the central goal of COSYN – to bring the power of modern team science to patients with otherwise untreatable diseases.
In conclusion, the COSYN project was crucial next step in “decoding” the genetic findings via intensive focus on the clinical and molecular comorbidities of ID, autism, and schizophrenia. We succeeded in all our major aims.